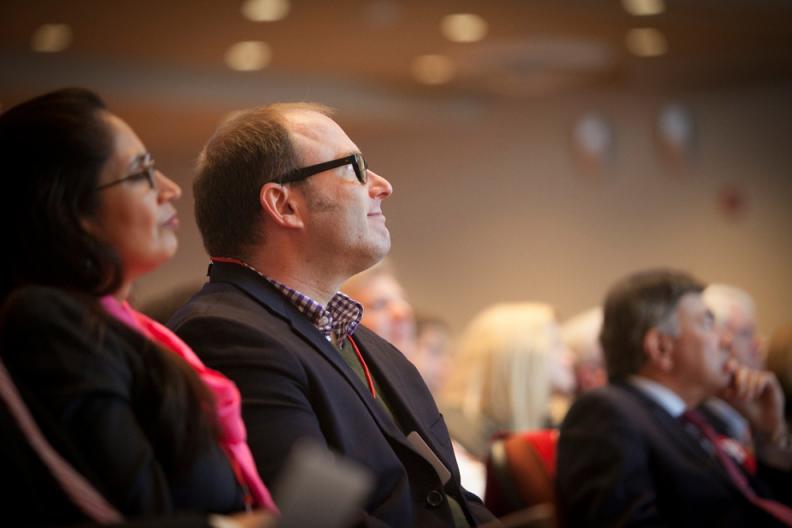 Nothing about Craig J. Fennie, Applied and Engineering Physics, is predictable or routine. “I stumble into things,” he says with a rueful smile. “There’s never a plan.” Yet Fennie’s (pronounced Fee-nee) specialty is all about understanding the precise physics and chemistry of complex materials and then planning, or modeling, them at the atomic level. It’s a standard procedure for his field, but Fennie has turned it on its head. Usually a new material is first discovered and then scientists try to measure its properties and come up with the simplest model to describe it. Fennie does the inverse, a technique known as ab initio materials-by-design. First, he targets a desired property or functionality that may or may not yet exist in nature, then he identifies a microscopic model that could in principle account for that property or functionality. Next, he develops a set of design criteria to build at the atomic level a material that could exist, given what is known about basic physics and chemistry.

Putting the atoms together in space requires chemical bonds, which taps into the fundamental principles of solid-state chemistry. One of Fennie’s talents is his ability to communicate with both physicists and chemists. “I am really conscious of making sure I speak the language of both disciplines,” he says, “so that everybody is on board. I look at the idea from many different angles. I want it to make sense no matter how you’re looking at it.”

This emphasis on both physics and chemistry helps ensure that every project Fennie works on fulfills his core requirement: It must lead to something new. “In the end, regardless of whether it turns out to be the magic material I hoped for or not,” he says, “I want to make sure there’s always new physics or new chemistry to be found.”

Fennie collaborates closely with fellow Cornell professors Darrell G. Schlom, Materials Science, David A. Muller, Applied and Engineering Physics, and more recently Eun-Ah Kim, Physics. Once he has designed the criteria for the new material he envisions, Fennie hands it over to Schlom to synthesize in the lab. The resulting material that Schlom grows, in some cases, is a film only one atom thick. Schlom uses an indirect method to look at the film in his lab, but the scientists are never sure that the design is accurate and that all the atoms are placed correctly until Muller puts the new material under his powerful atomic-scale microscope. Lately Kim has also contributed to the work. “Eun-Ah is a brilliant theorist and expert in a fascinating field of strongly correlated electron physics,” says Fennie. “She is helping to take our materials design work and apply it to an area of physics that is entirely new to me.”

What Will Replace Silicon?

For the last few years, Fennie and his collaborators have been working on electronic and magnetic materials. “These could be used in the electronics industry,” Fennie says. “We’re not working at the device level, but you can imagine that some of these materials could end up powering all the chips in all the computers of the future.”

Fennie points out that silicon, which has powered a microelectronics golden age for 50 years, is reaching its fundamental limits. “To make another qualitative leap like we’ve had with silicon we need radical new ideas,” he says, “and that usually means a new material.” In a quest to discover that new material, he has been focusing on multiferroics, a class of materials with both electric and magnetic properties. Multiferroics have shown great promise for data storage devices.

Storage devices usually use some sort of magnetic bit to hold the data, Fennie explains. Magnetic fields are very expensive to run, however. “Every time you want to read or write a new magnetic bit, you have to produce a new magnetic field, which costs lots of energy,” he says. “An electric field, on the other hand, is inherently lower in energy.” Fennie and his collaborators have created materials that combine electrical and magnetic states, which may allow for magnetic storage that is controlled by an electric field rather than a magnetic one.

Fennie came to the field of physics and academia in a roundabout way, starting with an undergraduate degree in engineering. “I was a terrible engineer,” he claims. “Traditional engineering values organization and the ability to calculate problems without mistakes. I make mistakes in everything I do. I’m not organized at all. The best parts of my engineering classes were the bits of physics. I always got excited about the physics, but I thought, ‘that’s for the smart guys on the other side of campus. I can’t do that.’”

Fresh out of college, Fennie turned his back on engineering and worked as a bouncer in a Philadelphia nightclub instead. “I come from a very working-class section of Philly,” Fennie says. “My parents didn’t go to college. When I got the job as a bouncer they said, ‘Oh great, you got a job!’”

After four years of guarding the nightclub doors, he decided to look up his old undergrad adviser for help getting back into the engineering field. “I said, ‘Maybe I made a mistake abandoning engineering like that,’” Fennie says. It turned out his old adviser had just started a company based on an idea Fennie had postulated as an undergrad, a way to model range predictions for electric cars using a complex computational system based on artificial neural networks.

Fennie’s adviser immediately hired him, and he went to work for the new company, which required him to work in one of the partner’s labs at Rutgers University. Since he was at Rutgers, Fennie decided to take a few graduate physics courses on the side without officially entering the graduate program. He signed up for quantum mechanics and solid-state physics—courses that would change his life. The professor teaching solid-state physics was so impressed by Fennie’s work that she asked him to join her lab, thinking he was a graduate student in physics. He explained that he was just taking a few courses. “She said, ‘If you want to do this, quit your job and I’ll get you in and you can work in my lab,’” Fennie remembers. “She became my adviser. Again I stumbled into it. I always stumble into everything!”

Fennie’s career since he received his doctoral degree in 2006 has been anything but stumbling. After winning the 2011 Faculty Early Career Development Award from the National Science Foundation and the 2012 Presidential Early Career Award for Scientists and Engineers, he followed up with a 2013 MacArthur Fellowship, commonly known as a “genius grant.” The MacArthur gives $125,000 a year for five years, no strings attached. Fennie is free to use the money for any purpose that will allow him to pursue his interests. He still hasn’t decided what that will be. “All I know is that I don’t want to be working on the same thing 10 years from now that I’m working on today,” he says.

He acknowledges that Cornell is known for encouraging broad-based thinking and fostering collaboration across disciplines, just the kind of place where a former bouncer-turned-physicist can feel free to switch out his interests and test new waters. “That’s why I’m at Cornell,” he says.