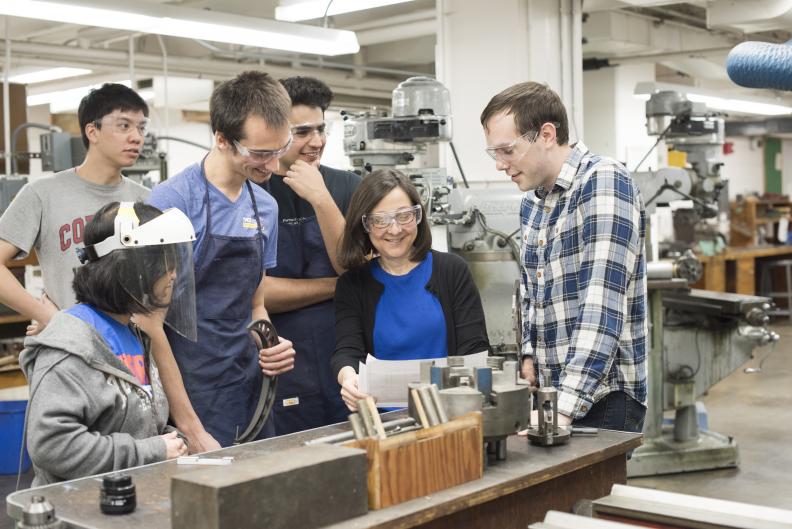 The do-it-yourself attitude runs deep in Lois Pollack. When she was a child, her physicist father encouraged her to build simple electronic circuits or to work alongside him in his wood shop. “Growing up, I had a lot of access to tools,” says Pollack. “I learned early on that people can build things.”

Additionally, Pollack learned that when things that have been made by people break, they can also be fixed by people. “I remember being really impressed by the realization that you could fix things that didn’t work,” says Pollack. “Things are made by humans and they can be fixed by humans—I have found this way of thinking about things to be formative and very useful.”

Flash ahead twenty-five years. One day in the mid-1990s Lois Pollack was reading an article in an APS (American Physical Society) magazine. She was no longer a ten-year old sorting through a box of interesting electronic devices. She was instead a Research Associate in Cornell’s Microkelvin Lab, doing research into low temperature physics. The article she read that day was a bit outside her field. It was about protein folding and the many unanswered questions the topic still presented.

Pollack thought through the problems and came to a simple conclusion: to answer some of the unanswered questions, researchers would simply have to quantify a few basic measures. “It was clear to me that all people would have to do would be to measure A, B, and C,” says Pollack. “I asked why nobody had measured A, B, and C and found out that there were no methods for people to measure A, B, and C. So I decided to do it myself.”

Pollack earned the support of Sol Gruner, who was (and still is) a professor in the Physics Department at Cornell. “Sol took me under his wing and trained me in biophysics,” says Pollack. Pollack’s new direction led to a tenure-track position, many publications, and her current stint as director of the School of Applied and Engineering Physics (AEP) at Cornell.

But all of that came later. The first steps were to figure out what sort of instrumentation would be needed to measure those things not yet measured and then to build them. Once the instruments were built, Pollack could begin to take a closer look at proteins. “These biomolecules are super complicated,” says Pollack. “Seeing just one view does not give you a full picture. Bringing in different methods and techniques helps to build a fuller picture.” Over the past twenty years the molecules Pollack studies have grown increasingly complex.

When asked to describe in general terms what her lab works on, Pollack said “Really there are two main threads to our work. We are engineers who work on instrumentation. We are always trying to build something that will allow us to see things in new ways.  But we are also biophysicists and we study the physics of nucleic acids. We want to know how RNA and DNA interact with proteins and other molecules in cells.”

RNA and DNA are some of the most complex molecules in the human body. “Both RNA and DNA are highly charged molecules and electrostatic forces dominate much of their biology,” says Pollack. “It is essential that we understand how the molecule interacts with itself and with other molecules.” Exactly how and where RNA folds on itself dictates much of the molecule’s behavior. Pollack hopes to unravel the complexities and then use RNA to have an impact on human health.

“RNA has incredible potential as both a drug target and as a scaffold on which to build new drugs,” says Pollack. “I like to understand things from the bottom up, at the molecular level. Diseases are often systemic, so to really have an impact on human health we will need to be collaborative.”

Pollack takes this same approach in her role as department director for AEP. “This is such a strong department,” says Pollack. “People come to me with great ideas all the time. As director it feels good to be able to make some of those ideas come true.” Pollack mentions a curricular innovation some within the department are implementing—the “flipped classroom” model—and her excitement for the idea is evident. “I can help support teachers who want to flip their classrooms. It feels good to have an impact not just on research and hiring, but also on how we teach our students.”

Pollack herself cares deeply about teaching. She has twice won teaching awards at Cornell. In 2003 she won the Swanson Excellence in Teaching Award and in 2013 she was given the Chau Excellence in Teaching Award. She also has undergraduates working in her lab most years. “They are persistent,” says Pollack with a smile. They find me and they earn their way in. If I can do that for an undergraduate then I am very happy about that.” Pollack then expounds on one of the biggest lessons undergraduates learn in the lab: Things don’t always work out. And when they don’t, you can go back and make changes and try something new. It sounds like the lessons her father taught her all those years ago have stuck.