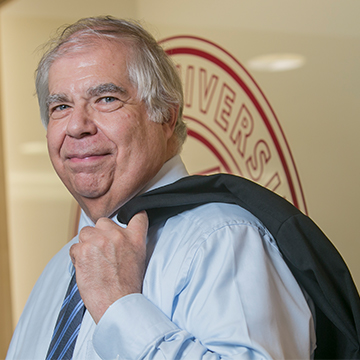 Robert Buhrman received his B.E.S. degree in 1967 from Johns Hopkins University in Engineering Physics, with departmental and general honors. He completed his Ph.D. studies at Cornell University in Applied Physics where his thesis research was on the superconducting properties of Al nanoparticles. Buhrman joined the Cornell Faculty in 1973 and is currently the John Edson Sweet Professor of Engineering in the School of Applied and Engineering Physics. He served as Director of Applied and Engineering Physics from 1988 to 1998. Buhrman was part of the Cornell faculty team that won the national competition for the original National Science Foundation funding for what is now the Cornell Nanoscale Facility (CNF), which is now one of the two major nodes of the National Nanofabrication Infrastructure Network. He served as Chair of the CNF Executive Committee from 1985 to 2002. Buhrman was also the founding (2001-2007) Director of the Center for Nanoscale Systems in Information Technologies, which was a National Science Foundation and New York State supported multidisciplinary research center from 2001-2012. Since 2007 Buhrman has also served as Cornell's Senior Vice Provost for Research. Buhrman is an Elected Fellow of the American Academy of Arts and Sciences.

Throughout his professional career Buhrman's research focus has been in the area of applied condensed matter physics, with an emphasis on what is now known as nanoscale science and engineering. He has contributed regularly to the scientific literature in these fields with currently more than 230 publications that have received more than 17,000 citations. Among the more noted research contributions of Buhrman and his collaborators are a seminal study of metallic nanoparticles, pioneering work in the understanding and optimization of metal/dielectric composite selective solar absorbers, the first demonstration of the ¬in-situ formation of superconducting rare-earth cuprate thin films, the first definitive demonstration of spin transfer torque switching in magnetic nanostructures, and the pioneering demonstration of spin transfer torque switching and excitation effects in magnetic tunnel junctions. Most recently Buhrman and his collaborators have discovered a giant spin Hall effect in Pt and Ta thin films and successfully applied it in a novel 3-terminal spin torque device that has potential for high performance magnetic memory and other spintronics applications.